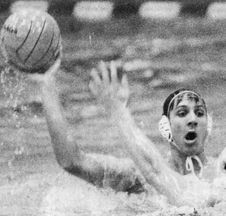 Thomas Tomsheck was a consistently excellent water polo player. As a two-meter player, he had a remarkably positive impact on every team he was in, often having the most assists and goals of the team. He was inducted into the Loyola Academy Athletic Hall of Fame in 2007 for his contributions to the team and what Loyola called “patiently working to get his teammates engaged yet grabbing the opportune moment to take over games.” After his graduation in 1986, he went on to further his water polo career at the U.S. Naval Academy where he was also very successful, granting him a spot in their hall of fame as well. Tomsheck was even able to participate in the U.S. Olympic Festival for three years while at university.